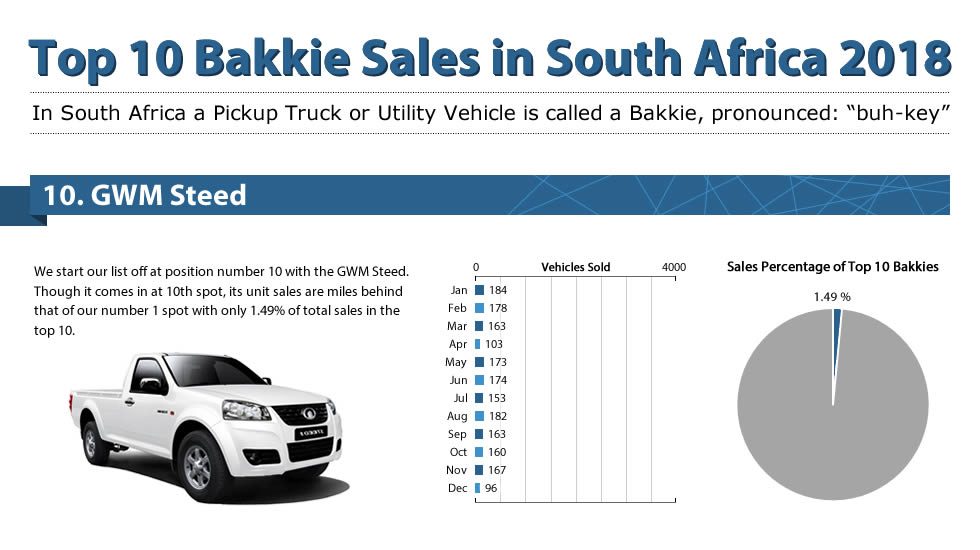 What exactly happened in terms of bakkie sales in 2018? Well, according to Naamsa, new bakkie sales came in at a total of 126 588 units. The Pick-up segment is going strong and it's easy to understand why. The primary use of the majority of these vehicles is work related which means it’s important to have an extended warranty for your bakkie.

The Toyota Hilux, which was the best-selling bakkie range in SA in 2017, sold 40 018 units. That's a whopping 9 877 units ahead of its nearest rival the Ford Ranger which sold 30 141 units. It's no surprise to see the Hilux in first spot. It's been a favourite in South Africa for decades and remains a favourite going into 2019. It peaked sales in September with 3943 units sold and sold an average of 3335 units a month.

As previously mentioned, the Ford Ranger came in at 2nd spot with a total of 30 141 units sold in 2018. Ford, with its "American muscle" reputation, has produced a bakkie that does a respectable job of rivaling the Toyota Hilux. However, Ford are taking this rivalry serious and have done a substantial mechanical overhaul of the 2019 Ford Ranger along with a facelift. Watch out Toyota...things are about to get interesting.

Next up in 3rd spot is the Nissan NP200. Nissan have a phenomenal reputation for producing top quality bakkies and the NP200 is no exception with 19 594 units sold in 2018. While it's smaller than the majority of bakkies on this list, this half tonne bakkie is a reliable and powerful work horse. If you're looking for a smaller bakkie, you won't go wrong with the NP200. It's a great choice in the small Pick-up segment.

Coming in at 4th spot we have the Isuzu KB which sold 15 520 units. This is no surprise...we actually expected the KB to be in the top 5. It's been around for decades (since 1988) and has been a strong favourite among farmers. A limited edition KB "X-Rider" was sold with more aggressive styling and Isuzu was so pleased by the sales that they made it a permanent fixture in the KB lineup.

Onto our next spot, this time we have the NP200's bigger sibling, the Nissan NP300. Despite scoring zero points for adult occupant protection in the Global NCAP test, the NP300 landed at 5th spot selling 9 569 units. That's 6 597 more units than its next rival, the VW Amarok, sold in 2018. The NP300 combines some luxury with practicality to form a well-rounded option in this segment.

And as you were expecting, we have the Volkswagen Amarok in 6th spot having sold 2 972 units last year. VW produced the Amarok as direct competition to the likes of the Toyota Hilux, Ford Ranger and Nissan NP300. It's designed to carry huge payloads and can easily carry more than a tonne over rough and muddy terrain. While you won't get as smooth a ride as you would in an SUV, the Amarok does a far better job than most of its rivals.

In 7th spot we have the Mahindra Pik-Up. To be frank, we didn't think we'd see a Mahindra in the top 10 and this took us by surprise. The Pik-Up is far from the best looking bakkie on this list, but the South African public seem to like it...despite its quirky, outdated look. The Mahindra Pik-Up was only 572 units behind the Amarok, selling a total of 2400 units last year.

Next up we have the Toyota Land Cruiser in 8th place with 2 388 units sold. This is the Hilux's less handsome brother, but what it lacks in looks it makes up for in practicality. With a 4.0 litre engine in the base model, the Land Cruiser puts out an impressive 170kW and 360Nm of torque and is a favourite among miners and farmers out in areas where most cars have trouble traversing.

The Nissan Navara takes up 9th spot and sales figures for 2018 showed 2 090 units sold. It's more of a leisure vehicle than a practical work horse and this is precisely what Nissan have manufactured it for. Sales for the Navara have been low because Nissan haven't made a concerted effort in making it "desirable" to the South African public. There are also better options available for a leisure/family double cab bakkie.

Lastly, in 10th place, we have the GWM Steed with 1 896 units sold. The Chinese manufacturer has found itself in a position where the Steed's quality is perceived as cheap. Many Chinese brands have found themselves in this position. Toyota was once in this position many many years ago and more recently Kia and Hyundai were as well. This means that GWM will get past this perception eventually and be a welcome in South Africans' eyes.

And that wraps up the top 10 bakkies sales for 2018. There have been many obvious players in this list and a very unexpected one. In the end, bakkie sales will continue as per usual until the industries these vehicles are bought for don't need them anymore. If you're interested, we have a previous article about bakkie sales here.